“Have you seen a boat move through the water? The wake that it cuts, the waves that furl behind it to either side?”
“Of course.”
“That’s how Hope’s kidnapper moves through the world of humanity. Everyone who sees him knows him on some level, and he leaves their knowing of him in his wake… a mark left wherever he’s passed by. Down in the deep, cold waters, in the black stillness far below the surface of conscious thought, they know who he is, no matter what he looks like, and it changes everything they thought was true about the world.”

The third and final book in this wondrous series is here.

Audio Clips from Across the Worlds

Using the magic of his simulacrum, Lugo leaves the warmth of the Keep and goes out into the winter night in search of Mellis and Adrian, who are in desperate pursuit of their baby daughter Hope and her kidnapper, Satan.

Intro to audio clip: The Exiled Angel and the Woman with the Rose Gold Hair

Trying to mislead his pursuers, Satan makes a detour into the home of Xenteriel, the Space Between’s last neutral angel. There he briefly drops his guise of the beautiful Amanda and reveals to the angel his true form. 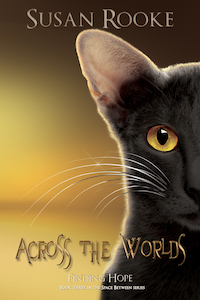 Get your FREE copy of Across the Worlds: Finding Hope Sample