Jalapeño Poppers are ubiquitous in these parts, especially during the warm months of the year. Many grocery stores (at least in Texas) even sell them pre-prepared in the meat department. No muss, no fuss, no lighting your fingertips on fire while cleaning and scraping out the veins of all those jalapeños. All you have to do is buy a package and cook them at home until their little bacon swaddlings turn crisp.

Recipes for them abound in cookbooks and online, but many are just minor variations on “Stuff halved and hollowed fresh jalapeños with cream cheese. Wrap in bacon and secure with a toothpick.” Then, since these morsels are associated with the outdoor grilling season, the recipe might tell you to cook the poppers on the grill. Fine, but if you’re not careful, this is a good way for your cheese filling to end up in the grill instead of on your plate.

Despite the similarity of many of these recipes, I can assure you that not all Jalapeño Poppers are created equal. I’m a fan of each of the basic components—the peppers, the cream cheese, the bacon—but the finished product always seemed blah, and left me underwhelmed. So I never bothered to make them.

Then a few summers ago, our jalapeño bush produced an embarrassing surfeit of peppers, far more than I could use in the normal course of things. I racked my brains over what to do with them. Pour some vinegar on them and make hot pepper sauce? I did that, but it was only a temporary solution. The peppers kept coming, and how much hot pepper sauce can a person really go through every day? Poppers were the only way I could think of to use the quantities of jalapeños we were facing.

Since our chives and thyme and basil plants were also producing their little hearts out, I decided to add all three herbs to the cream cheese filling to give the poppers a flavor upgrade. The parmesan cheese was hanging out in the refrigerator without enough to do, so it went in too. Et voilà! I had a recipe that took poppers from pedestrian blandness to flavorful perfection. One of our favorite summer evening snacks was born. Thank heavens we have an overachieving pepper plant again this year! 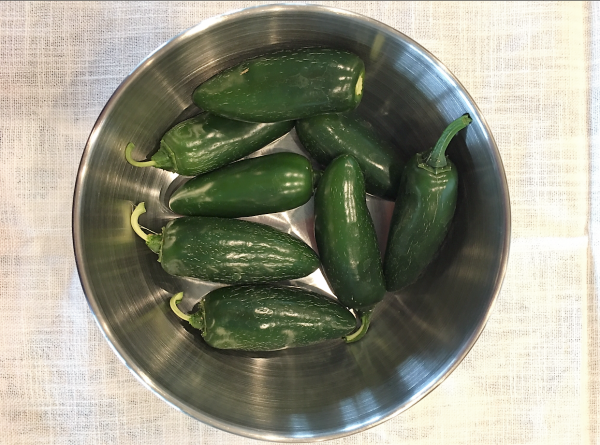 Filling Mixture (makes enough to fill both halves of about 15 medium-sized fresh jalapeños):

Mix these all together in a medium-sized bowl and refrigerate for a couple of hours to allow the flavors to develop. 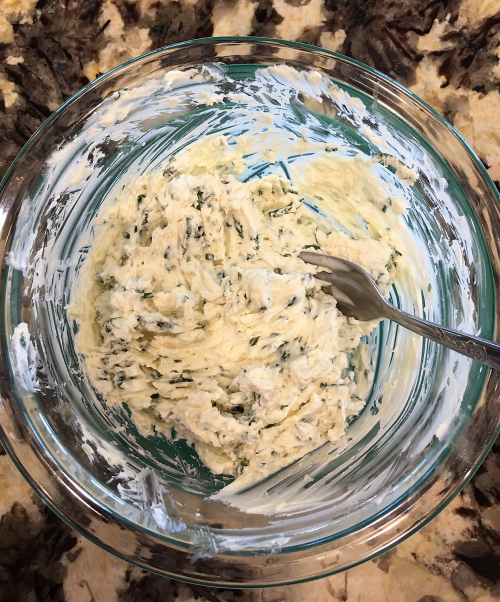 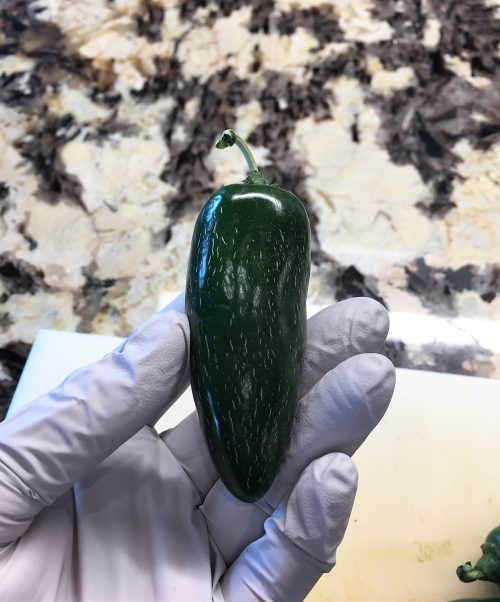 • Cut the stems off the fresh, whole peppers and halve them lengthwise. About 15 medium ones should do it (with maybe a couple extras in reserve) if you’re going to use all the filling at once.
• Scrape out the seeds and veins (I use a paring knife) so you have smooth little green boats to stuff.
• Cut bacon slices (either thick-sliced or regular) in halves or thirds to wrap each popper. It’s hard to be specific about the bacon. You’ll have to judge how much you want to use, but if you have a whole slice of bacon per whole jalapeño, you’ll be sure to have enough.

• Fill the pepper boats with the cheese mixture (I use a teaspoon).
• Don’t overfill. It’s tempting, but your excess filling will ooze out and drip onto the sheet pan, going to waste. I fill them level with the top edge of the pepper, or even a tad less.
• Wrap each popper with a piece of bacon and secure with a toothpick.
• They can be refrigerated until you’re ready to bake them. If you’ll be holding them more than an hour, cover the poppers with plastic wrap so the filling doesn’t dry out. 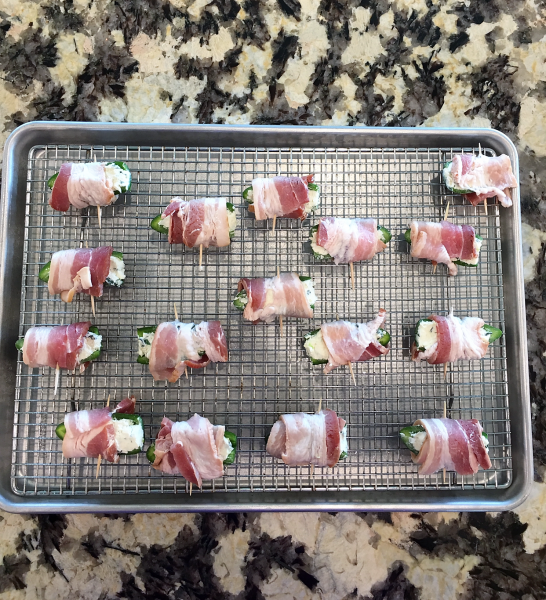 • Preheat the oven to 400 degrees.
• Put a cooling rack on a cookie sheet or half sheet pan and spray both thoroughly with cooking spray.
• Arrange the poppers on the cooling rack and bake them for 25 minutes, then finish briefly under the broiler. Keep an eye on them, as they should already be nicely browning by this point.

• For heaven’s sake, DO wear gloves for handling the peppers. I buy the disposable food-safe ones from Costco. They’re usually near the pharmacy section. (Don’t use powdered gloves.) Your eyes will thank you when you remove your contacts that night.
• If you have more filling than jalapeños, no worries. The cheese filling will keep several days in the refrigerator until you can use it up. I haven’t tried it, but it’s probably good on bagels too. Or crostini, with maybe a bit of sundried tomato tapenade on top!
• Store-bought peppers work just fine. They’re usually a lot bigger than homegrown and a lot milder. I think homegrown ones have the better flavor, but maybe that’s because I’m remembering all the watering and coddling that went into them.
• I use thick-sliced bacon, but you certainly can use the regular stuff. Thick-sliced doesn’t stretch to wrap around a pepper as well as thin-sliced, but I like the meatiness of it. Whatever bacon you use, cut the slices in half instead of in thirds if they’re short, or if the jalapeños are large.
• You can definitely grill the poppers outdoors, and it gives them a nice flavor. However, I recommend putting foil on the grill to prevent losing a.) the filling, or b.) the whole popper to the flames. Also, it’s hard to get the entire length of bacon to crisp properly (since you can’t flip the peppers over without losing the cheese). The oven, on the other hand, produces excellent, predictable results. 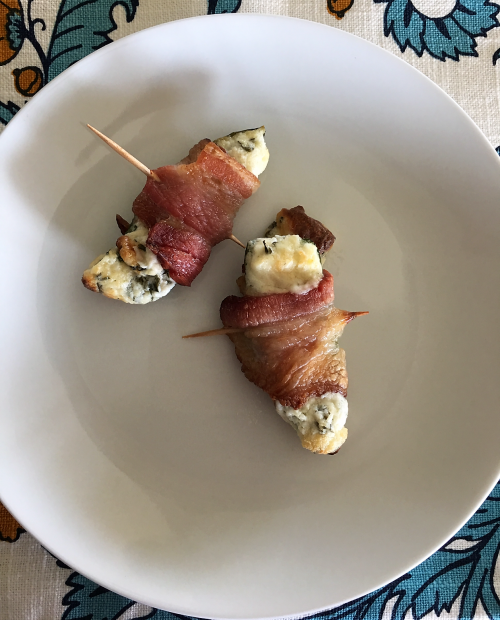