Once More. With Feeling, Dammit!

Glen went out of town for 5 days. The good news is, nothing died on my watch.

When you have livestock (and I can tell you that horses are even more prone to sudden, astonishing feats of death than cows), that’s no small accomplishment. Even though I rarely put my nose out the door while he was gone, I’m pretty sure I would have noticed the vultures from the windows. I’m speaking from experience. That’s what happened when he went out of town last year.

Other than fending off death while he was gone, what else did I do? Well, that’s the bad news. Not much.

I didn’t burn down the house. So that’s good. (That anxiety seems to be a recurring motif with me. It’s like I wake up every morning, thinking, “How many ways can I avoid burning down the house today?”) I fed the cat and the dog. I fed myself. I swept the farmhouse several times a day, owing to the cat box (which, yes, I cleaned daily) in the kitchen broom closet. I made the bed (the half I slept in, anyway). I reread the first two books of J.K. Rowling’s Harry Potter series. I brushed my teeth. And . . . um . . .

What had I intended to do? Oh, lord. I meant to write. For starters, I’d begun a blog post about faeries. It will have to wait until next week, at least.

But the writing task I really meant to tackle is my novel, The Space Between. I need to do some revising/editing on it. One . . . last . . . time.

Wait—wasn’t I supposed to be done with that? No. But, as it turns out, I’m not that far off. You may remember that in June I wrote about my decision to self-publish after taking a Writers’ League of Texas class on the subject (“So I Took a Class . . .”). Danielle Hartman Acee of The Authors’ Assistant, an editing/publishing/promotional services firm, taught the class, and so impressed me with her straight-shooting knowhow that I decided to contact The Authors’ Assistant about helping me on my journey. 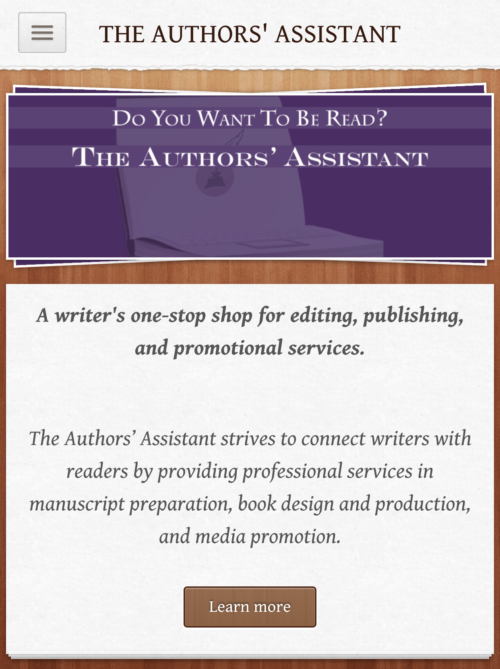 Long story short, the firm’s developmental editor, Mindy Reed, has finished her work on The Space Between. Thanks to her knowledge and expertise, I’m closer to publishing this book than I’ve ever been. Mindy’s help was invaluable, and she had some good things to say about the manuscript. All I need to do now is incorporate most of her edits as-is, and tweak a few more to better match my own aesthetic.

Okay, that doesn’t sound too onerous. So why didn’t I do it? I’m not really sure. I just . . . couldn’t. Instead, I oozed deeper and deeper into the sofa as the 5 days of Glen’s absence progressed. It was a serious chore to force myself to do the few things I did do. Taking on the book again seemed like such a Herculean job as to be impossible. Maybe partly because my tireless supporter was out of town doing his own thing, and nobody was home to give me a sharp kick in the rear.

Four days after Glen left, I fretted and whined to Katie about my slug-liness. “I have accomplished nothing today,” I texted. “Nothing whatsoever. I’m quite ashamed of myself.”

The best daughter in the world replied, “Oh, hush. You deserve a vacation the same way he does.”

This is exactly the enabling response I want from my loved ones, but it doesn’t do much to get me off the sofa.

I have to say these 5 days of doing almost nothing have been a refreshing break. We’re familiar with the phenomenon of needing a vacation from your vacation. Vacations are tiring. So much planning and traveling, so much to squeeze into each 24 hours that you’re gone. Then once you’re back home, you’re expected to spring right back into your normal routine. Full tilt. (In that sense, going on vacation feels kind of like having a baby to me.) A week after getting home from Oklahoma, Glen and I had had enough of catching up on chores and responsibilities. We needed a little downtime, a vacation from our vacation. So while Glen went off to New Mexico with his friends for an annual sporting event, I collapsed on the sofa. Unsurprisingly, given the way he’s wired, Mr. Hyperactive Man chose a mental break over a physical one. I chose both.

He’s home now, though, and it’s time for me to get busy. I’m gritting my teeth, because I know what has to be done. The Space Between won’t get published otherwise, and I’ve spent too much time getting it to this point to let it languish. More than ten years, actually. And therein lies the likely source of my lethargy. Getting the developmental edit back, along with Mindy’s heartening responses, was such a relief that I just sort of sagged in the middle and went down hard. I’d fought so long to get someone’s—anyone’s—attention, and I’d revised the manuscript so . . . many . . . times. I just couldn’t do any more. For the moment, at least, I was tired to the bone.

By the time you read this, though, I’ll be back at work on it. Because now there really is an end in sight.