A couple of weeks ago Glen noticed honeybees swarming around a valve box in the front yard. As a precaution against snakes, he keeps the hole in the valve box lid covered with a flat stone. (Opening the valve box to find a rattler coiled in the bottom is a surprise easily avoided with a little forethought, he showed me.) Somehow the stone had shifted, exposing the hole, and honeybees, not snakes, had moved in.

Not one to let apiphobia deter him, Glen walked right up to it and lifted the lid.

Kidding. He walked nowhere near it and prudently decided he’d better call his friend Shug Evans. Shug and his son Ryan are apiarists, and together they own Bear Foods. 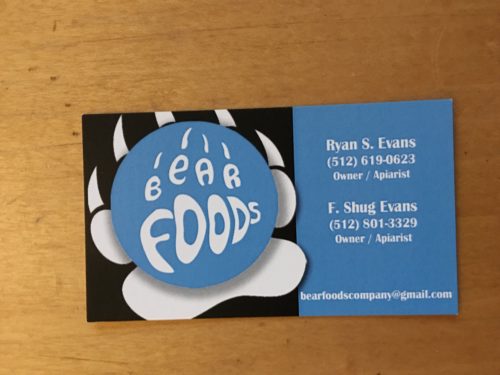 Shug has kept bees for years. He’s got 15 hives in his own yard and he leases hives to folks who want the ecological benefits of having their own bee population. We didn’t want a hive in the valve box, though, so he came the next day to remove them from our yard and relocate them to his.

He brought all his bee paraphernalia with him: 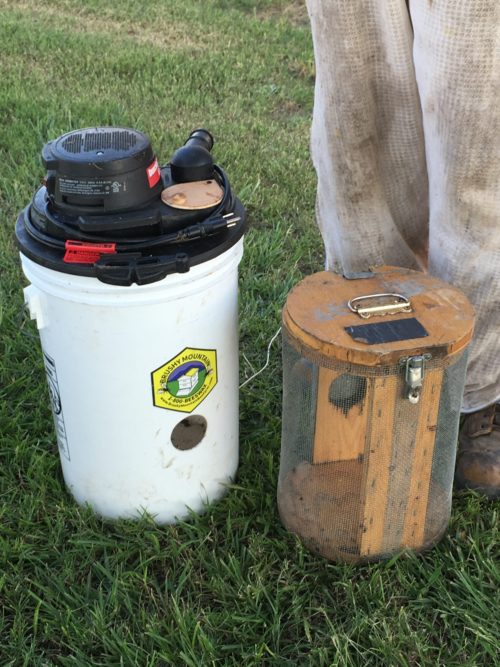 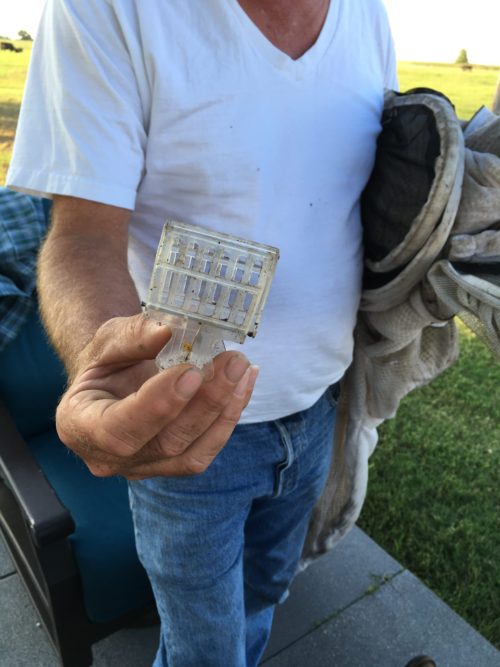 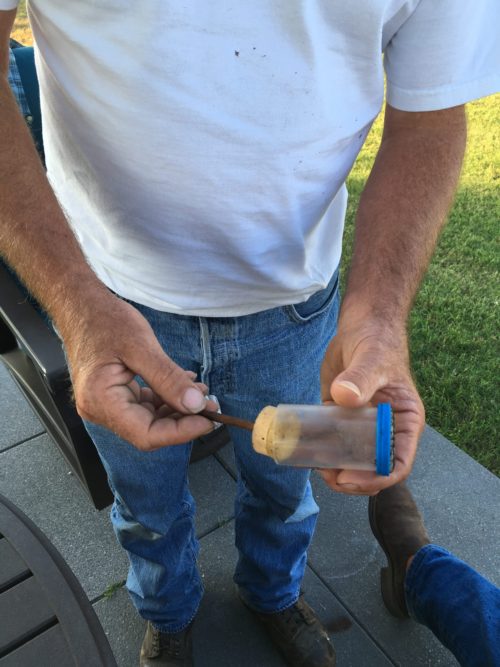 The clamp is how he captures the queen, removing her from the hive. The plastic tube contraption allows her wings to be clipped. With the queen in the tube, Shug pushes the foam insert gently upward, forcing the queen against the mesh at the top. Her wings protrude and he clips them. This prevents her from flying away when he introduces her to her new home. By the time her wings grow back she’s comfortably settled in.

After readying his equipment, he suited up and started vacuuming. 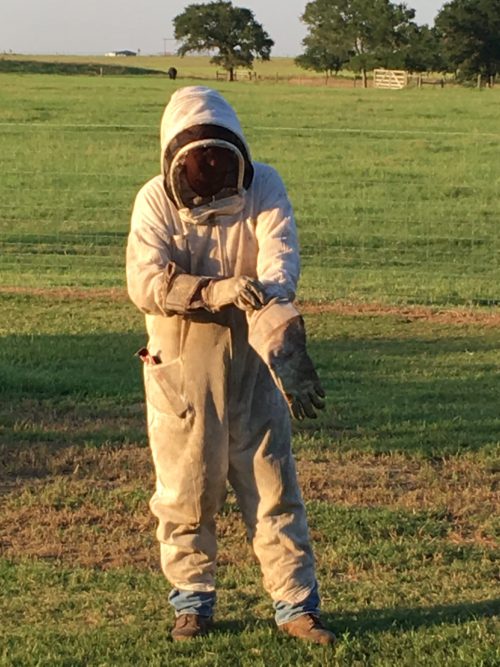 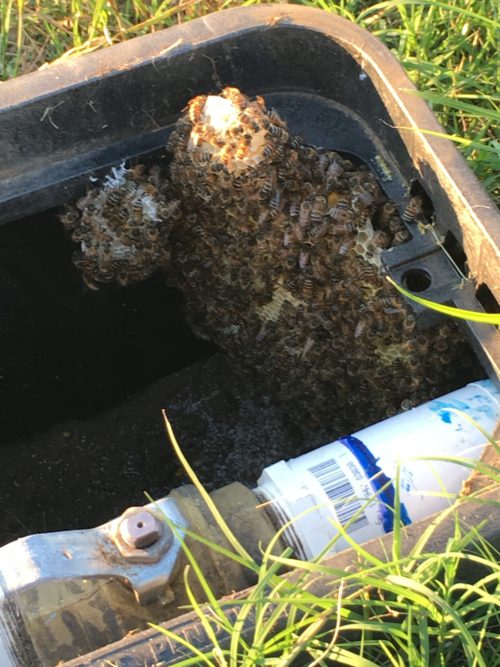 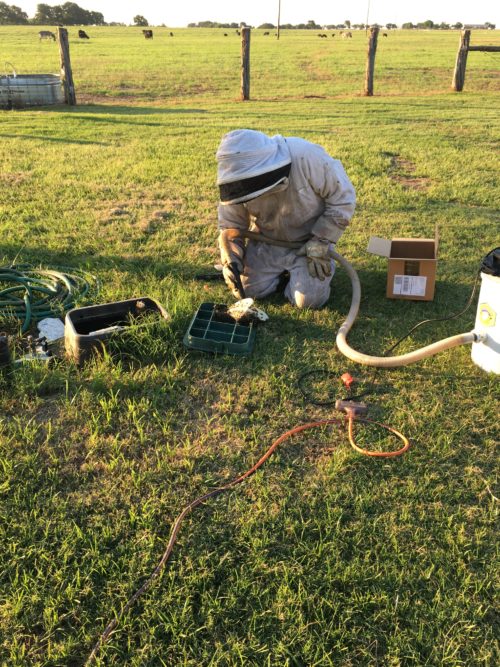 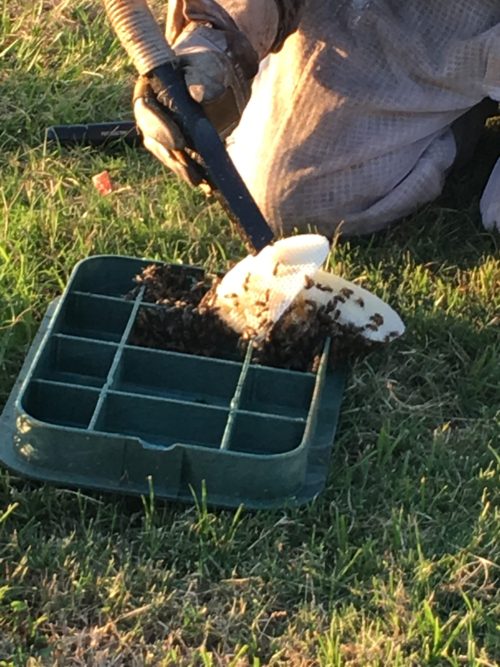 There were 5-6 pieces of comb. 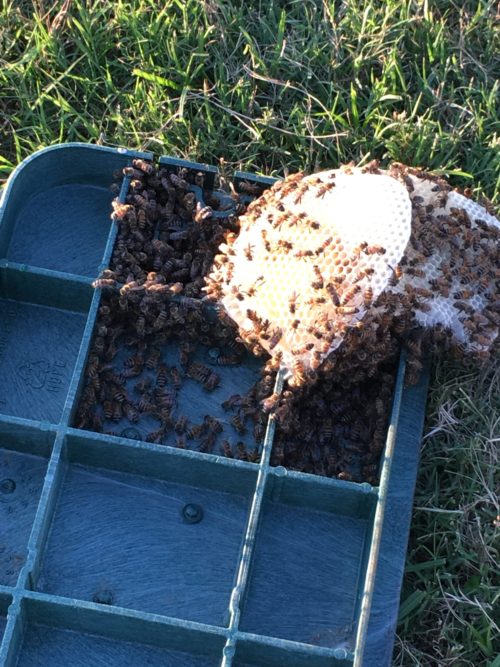 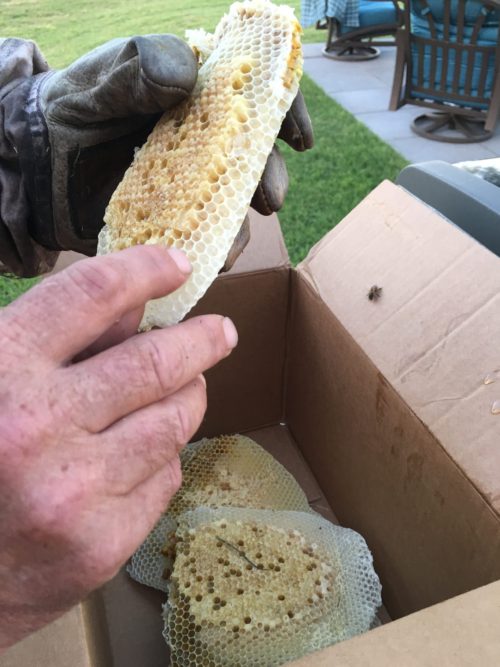 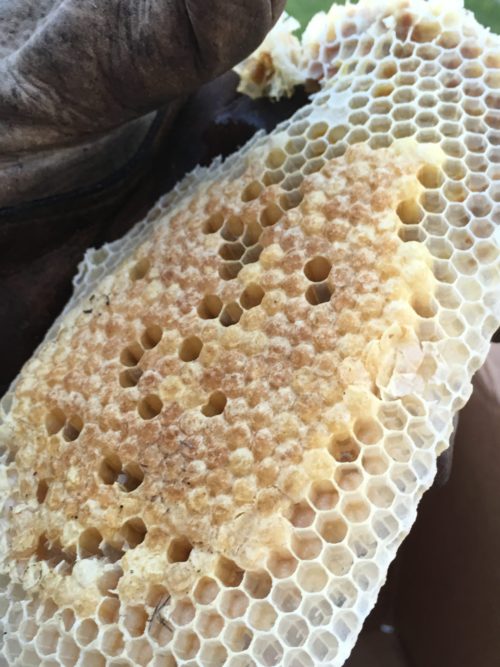 These he removed to put in the hive at their new home. There was very little honey to speak of, as our colony was new. The average hive has about 10,000 bees. Shug estimated ours was about half that size, and luckily, the bees were very easygoing. He carefully vacuumed them into the bee cage. 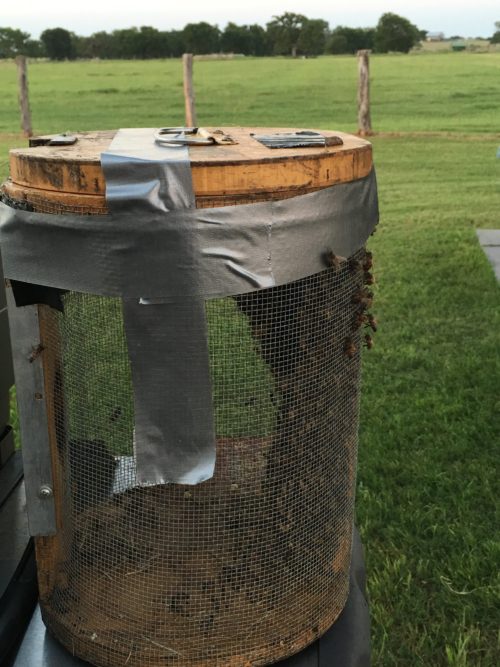 Bees Packed Up and Ready to Move

Dusk was falling by then, and the interior of the valve box was in shadow. Shug had to use his flashlight to keep working. Soon after he found the queen, successfully captured her, and wrapped up the operation. 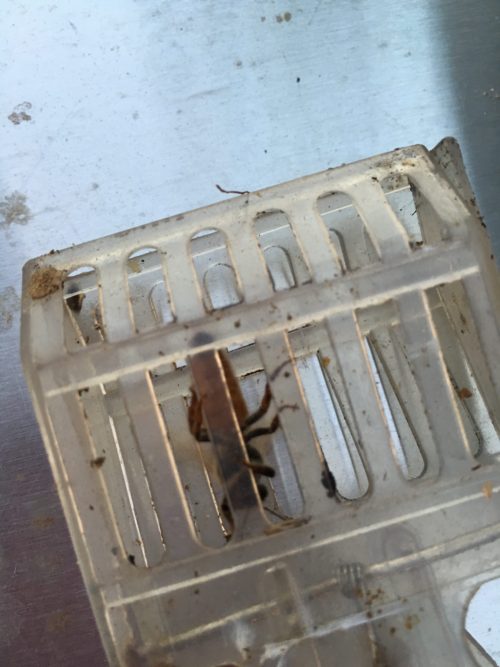 After that it was just a matter of loading up his truck, ensuring that the bees were secured against jostling, and bees and beekeeper departed. Glen talked to Shug 6 days after the relocation, and the bees have adjusted well in their new location.

Someday, once our forever home is built and things are back to normal, we’d like for Shug to supply us with a hive (just not in the yard, please, says the apiphobe). Not only is it good for the land, and by extension, for our cattle and for us, but also we want to do our part to help the dwindling bee population. Science has made progress in determining the reasons for their severe decline, but let’s hope it’s not too little, too late. This July 9, 2015 article from Mother Jones, “Here’s Why All the Bees Are Dying,”explains how dire the situation is. If we can possibly avoid it, Glen and I don’t ever want to exterminate our bees.

Finally, here is my poem “In the Aftermath of Plague,” winner of the Poetry Society of Texas 2012 Sue Cole Memorial Award, subsequently appearing (in slightly different form) in the Society’s 2013 Book of the Year:

IN THE AFTERMATH OF PLAGUE

A hot summer breeze drones through
the listless leaves of potted citrus trees—
the Meyer lemon, Key lime. In the absence
of honeybees to give it purpose it seems

undisciplined. It teases the bedded
herbs, the blossoms that part their pale
lips appealingly. In the long, still days
to follow, the greenery endures, offering

among them, spread the buzz
of rumor. Apian culture has collapsed
in soft flurries of the billion dead.
Great cities of them, passing contagion

one to another, citizen to citizen, passing
out of time. The basil blossoms droop
their heads and ruminate, maintain alone
their fragrant vigil. At last a low hum

permeates their solitude, their vestal
trembling, as honeybees—too few—dance
in and out in serene minuet, for all the world
as if they were not the last living of their kind.