Mellis, a courageous and resourceful young woman, is kidnapped from the human world and taken to the Space Between by a tribe of faeries called the Penitents. Because of guilt over an ancient sin committed by their angel ancestors against the Maker, the Penitents have cursed themselves with grotesque physical disfigurements. Mellis can help them reunite with the Maker, and find their way back to redemption, but she would need to give up the life she’s always known to remain in the Space Between.

As she struggles with this heart-wrenching decision, one of the Penitents, bent on revenge, commits a gruesome attack against the tribe, and they learn he has taken Satan—the Maker’s greatest enemy—as his ally. All in the Space Between are facing grave danger. Will a long-awaited act of vengeance save them?

Reviews for The Space Between

“I was too intrigued to put it down. I was sucked into Mellis’ story and was falling in love at the same time she was.”
– Leels Loves Books

“With a mixture of fantasy and all things Heaven and Earth, this tale combines the stories of several characters into an intricate, twisting plot.

[Rooke] does an amazing job at bringing every single person and creature to life with its own personality and tale, while keeping the plot running along. There are unexpected twists, plenty of them. These aren’t thrown in with generic style but sail right in as if they truly belong, while adding layers of complexity.”
– Tonja Drecker, author and book reviewer

“The world building and story were just brilliant and the imagery that Rooke conjures up left me feeling I was right there along with Mellis.”
– Fee, eBook Addicts Blogger

“…a fresh take on angels and demons. It is the start of a series and one that I am curious to see where it is going from here.”
– J Bronder Book Reviews

“The characters are unique and described so well that I could picture each one as I read. Everyone has their own interesting story.”
– Dawn, Bound For Escape Blog

“An epic fantasy full of magical and mythical creatures that simply take your breath away. This book really hooked me in from the very start.”
– Kati, To Be Read Blog

“The story structured within the pages is fascinating; the descriptions were so vivid that I could actually visualise them.”
– Poesy In Chrysalis Blog

“The characters are vivid and well defined. The writing is done very well, and it is a gripping tale.”
– Teresa Noel, Blogger

“Susan Rooke masterfully builds her worlds with rich detailed descriptions. The reader feels as if they are there in The Space Between and the surrounding realms. Our protagonist, a young woman named Mellis, experiences sudden and unexpected visits to the realms where she encounters a rich array of talking animals, and unusual characters and situations that bring to mind an adult version of Alice in Wonderland. The Space Between offers fast-moving adventure and a fresh portrayal of faeries!”
– Salina B Baker, author of Angels & Patriots

Audio Clips from The Space Between

Mellis taunts Satan into a confrontation

Mellis experiences a glimpse of Hell 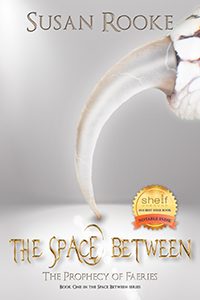 Complete the form to receive Chapter One of Susan’s novel, The Space Between. Subscribers will also receive her occasional newsletter with updates on her novels and other writing.