When we moved out to the country I got a card to the nearest small town library, an airy, modern facility. For several months I selected books at random from the general fiction shelves and devoured them with satisfaction. (I highly recommend the dark and rather horrifying Dan Simmons novel Drood. Simmons writes in the persona of 19th century author Wilkie Collins, who relates his peculiarly subservient and envious relationship with his friend, the more famous Charles Dickens. Wonderful period details. Really mesmerizing!) Then this past January I decided to be more methodical in my choices, probably in a misguided attempt at a New Year’s resolution. Starting with the fiction, I would read the 96 books on Stephen King’s Reading List for Writers. Or as many of them as I could find in the library.

It’s been seven months, and I still haven’t been back to that public library. Of course I know it’s not the library’s fault. That writer is fairly well-regarded and popular, and nobody forced me to take those books off the shelf. But they left me with such a bad taste in my mouth that I’ve had to do a fiction cleanse. To start, I’ve been reading nonfiction from my personal collection. Like this truly wondrous Sy Montgomery book about octopuses: 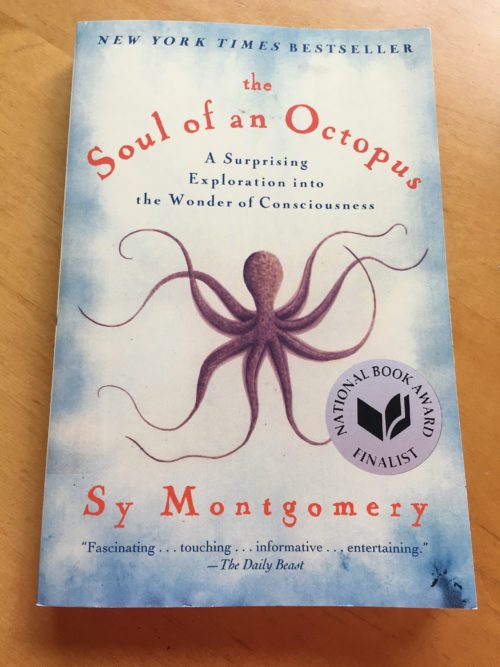 I realize this aversion can’t go on much longer. For heaven’s sake, I write novels myself. I have to read the works of other writers to stay in the game. So when I finish The Soul of an Octopus, I’ll go to the children’s/young adult section of the library and I’ll reread some of the books that gave me so much pleasure in childhood. Especially C.S. Lewis. I miss Narnia. Only then will I go back to the general fiction section. I’ll forget about suggested reading lists and resume choosing at random. I’ll probably stay away from Cormac McCarthy, though. Something tells me I wouldn’t like his characters either.