Glen raises his eyes. He’s in his black recliner, a ballpoint in his right hand, an open binder across his lap. The binder is full of birth records and registration forms: over a year’s worth of paperwork on several dozen head of cattle. 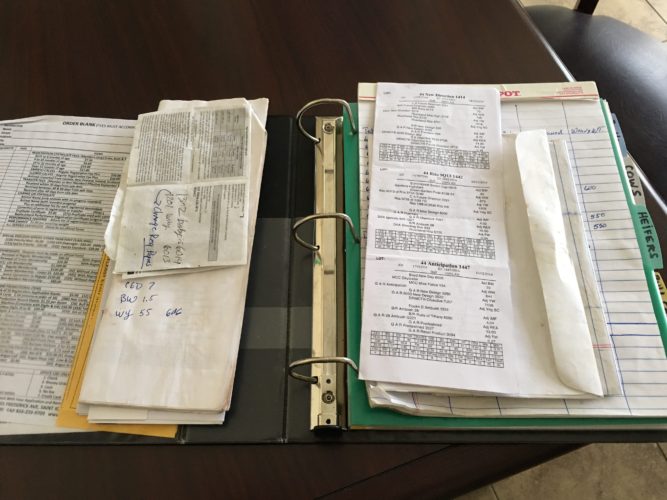 His look is intent but distant: aimed through me, rather than at me, considering options. The ballpoint clicks repeatedly as his thumb presses the release button. A maddening noise. Mr. Hyperactive Man is immune to maddening noises. In fact, he never hears them.

He stares through me a few moments longer, then turns his attention back to his paperwork. After a time he speaks again. “That’s what I said, right? 1201?”

He starts to rise from his chair. “I need to find out. That’s the only mama I still need to match a calf to. I’m going out to watch them for awhile, see who sucks on who.”

“Now? You just came in.” It’s a Sunday in August. He’s been working outdoors from 7:00 this morning to 2:30pm. It’s now 3:00. I could probably wipe him up with a damp paper towel and leave nothing but a grease spot to show he ever existed. Yet I’m astonished when he sinks back into his recliner. He must be really tired.

In the next day or two Glen rides out into the pasture in his golf cart to observe the behavior, nursing and otherwise, of his bovines. The question nags at him. Who’s sucking on 1201? Since 2015 it’s taken him long hours and days of work to untangle the snarls resulting when the herd and all their papers were transferred to us. There was a period of weeks when we owned the cows but not the land they lived on, when we didn’t feel completely free about coming out here to check on things. Ear tags came untagged, brands didn’t get branded, and records weren’t recorded. In the year since then, calves kept being born, complicating an already convoluted situation. But now all is at last in order. He just needs this one answer.

Instead of an answer he finds a free-for-all.

Calves aren’t that particular about who they nurse from. Any mother’s udder will do, provided the cow allows it. And a surprising number of cows do. The ones with the newest babies typically don’t. Their biological imperative directs them to save their milk for their own offspring. But quite a few of the rest don’t care. Like kindly wet nurses, they share with any youngster in need. They’ll stand around, sometimes grazing, sometimes munching their cud with a benevolent, faraway look, while a succession of demanding calves—sometimes two at once—nuzzle and maul their hind regions.

“Did you get it figured out?” I ask him when he returns from the pasture.

“It’s a lovefest out there.” He shakes his head. “Just a damn lovefest.”

It takes patience to learn the answer: waiting for a calf to get hungry, then quietly watching what happens next. Mr. Hyperactive Man is, by definition, one of the least patient people I know. He’s not exactly quiet, either. But fortunately he loves spending time with his cows. If all the calves bore ear tags from birth, when their mothers are most likely to allow only their own precious darlings to suck, it would be easier to pair the mothers with the babies. That isn’t how it works, though. Ears are more easily tagged when the herd is rounded up in pens, ready to be worked. Tagging one cow or calf at a time in the pasture is not as efficient. Also, some mothers can be protective of their newborns, discouraging anyone–cow or human–from coming too close

Finally, though, through a process of elimination and observation that has Glen spending hours in the golf cart, he nails it down. When he drives back to the house he shows me this picture he’s taken of the calf: 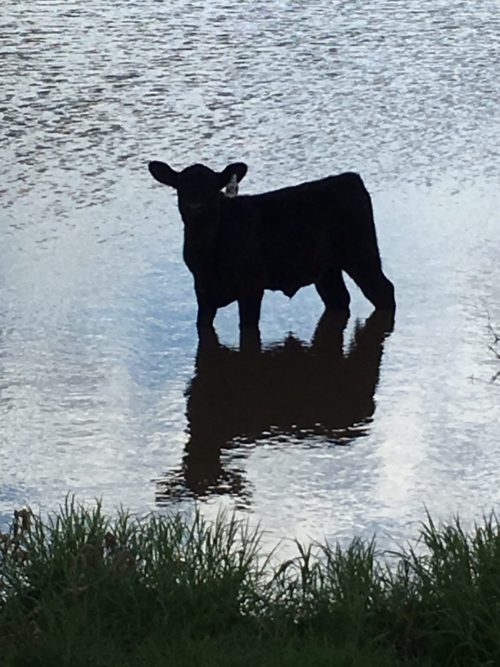 “Oh, how cute!” I try without success to decipher the ear tag. “So what number did it turn out to be?”