In a number of unbeneficial ways, I am not my mother’s daughter. Her motto, which she tirelessly tried to drill into her children’s heads, was “Do it now.” My motto has always been “When I get around to it.” I said it so often that one Christmas some jokester gave me a blue circle of paper with the words “Round Toit” printed on it. I was young. It struck me as humorous. Mistakenly, I still thought I had time on my side.

My mother, on the other hand, was adamant in her conviction that there is no time like the present. Seize the day, clear the slate. Do it now. She would say, only half-joking, that she wanted her tombstone to read “She Did It Now.” (And we honored her wish.) But given my choice, I’d much rather do it later. If at all. Why? Hell if I know. My motto isn’t an effective strategy for accomplishing anything. 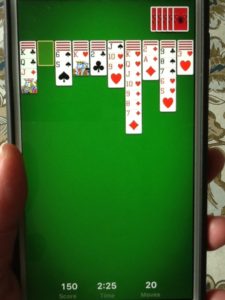 These are my fingers, not accomplishing anything

What’s worse is I’m a shy procrastinator, with a paralyzing fear of putting myself “out there.” Not only do I postpone the dreams and goals dearest to my heart, but also I mumble incoherent gibberish when I try to talk about them. The idea of marketing my book in a 30-second elevator pitch terrifies me. So the point of this website and blog is to just . . . get over it. Because I finally wrote the novel I’d always intended to write. 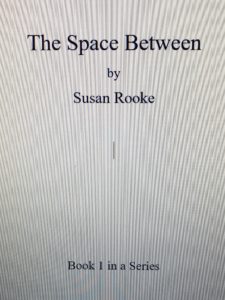 I’ve also written the sequel, and after that there’ll be at least one more in the series. So I need to do two things: keep writing, and spread the word about the books. My books, dangit.

But first I need to tackle the procrastination in the room. The biggest timewaster? E-solitaire. It’s sobering to think of the hours I’ve squandered on that over the years, instead of spending them with my loved ones. Or reading. Or birdwatching. Or cooking. Or hiking. Heck, almost anything is more valuable than e-solitaire. Many of those hours should’ve been spent writing. And from now on, will be. My books can’t write themselves.

So why did I marry Mr. Hyperactive Man, he of the noted intolerance for procrastination? The obvious answer is that I find him irresistible, but also I may have had a vague notion that he could save me from myself. The more puzzling question is why on earth did he marry such an expert time fritterer? No idea, but thank you for being patient, Glen. I really am getting around to it. Finally.

Tagged With: procrastination, The Space Between, writing