The Machete: A Cocktail (and still REALLY good!)

Intro: As I mentioned two weeks ago, today’s post will be a rerun. Though I’m making great strides (121,000+ words and counting!), I still need some time to finish writing The Realm Below: The Rise of Tanipestis. Especially after the delay caused by the left hand vs. demonic clothes dryer snafu. So today, in this post from May 2016, I’m revisiting the cocktail I accidentally invented due to a lack of the proper ingredients. And it’s a good one. I get requests for it when out-of-towners like The Daughter and Glen’s sister Denise come to visit. We all love it, and it’s ideal for this sultry weather. Saharan dust? Who cares? Wash it down with a Machete! Here you go:

The Machete is a similar case. Our daughter Katie, a talented cocktail hobbyist, had told me precisely how to make a Mojito. She’d done her online research, her bar top tinkering, and emailed me a recipe for the result. It calls for white rum (of course she specified the brand), angostura bitters, fresh-squeezed lime juice, simple syrup (1 part sugar to 1 part water), and exactly 9-10 leaves of mint. Glen and I had planted our spring herbs, and the mint was taking off. Along came a warm afternoon, and there it was—the perfect excuse to make ourselves some Mojitos! Then I started assembling the ingredients and realized it was Beard on Bread all over again.

I didn’t have white rum; I had gold. Didn’t have limes, but I had lemons. No angostura bitters, but oddly enough I found an unopened bottle of orange bitters in the pantry. No idea where it came from. So: gold rum, orange bitters, fresh lemon juice, simple syrup, and mint. How could that be anything but good? I got out the cocktail shaker and made a double batch for Glen and me. (Did I count out 18-20 mint leaves? Or even 9-10? Pffft. No.) Delicious. It needed a name. 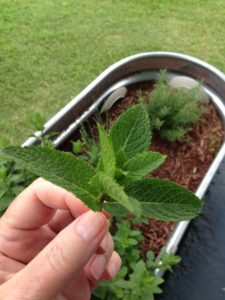 I wanted a name sort of like mojito. Something conjuring Latin America, subtly masculine. I wondered if machito was a word in Spanish, and if so, did it stem from macho? I looked it up. It’s a word, alright, and it’s a diminutive of macho. But it turns out machitos are a dish made from the small intestines of livestock, typically young goats, fried up and/or stuffed with various other ingredients. The details are vague. A couple of descriptions likened the dish to haggis, the Scottish specialty made from sheep offal and oatmeal (among other savories), and traditionally cooked in a sheep’s stomach. Three thoughts on this: 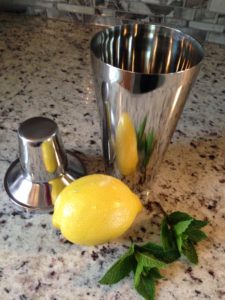 Add ice to the shaker and shake for 30 seconds. Pour contents into a glass (remove bruised mint sprig), or strain into a glass filled with ice. Garnish with a fresh sprig of mint. Makes 1. 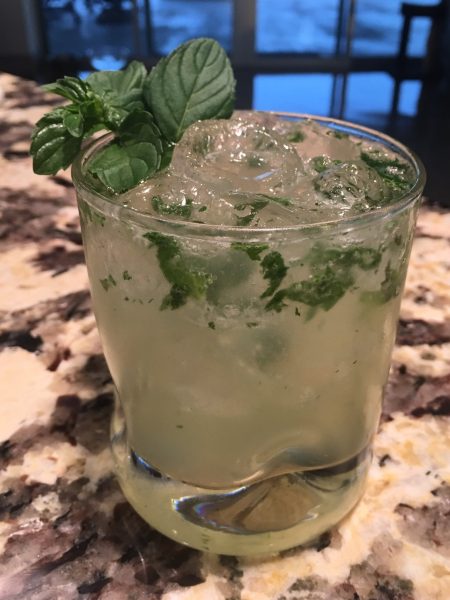