There are saints among us. Truly good, kind, helpful people who always put the needs of others above their own.

I’m not one of them.

Just thought I’d clear that up, in case there was any question.

But here’s the real question: How do those of us who aren’t saints (and I think I’m in excellent company here) spend our lives on Earth so that we don’t feel we’ve wasted them? I do believe in reincarnation (and so does my practical, boots-on-terra firma Glen), but I’m not going to spend this life assured that whatever time I’m wasting now will be made up when I get another go at it. For one thing, I can’t be certain I will get another go. This may be it. In fact, this may be IT, in the broadest sense. No second chances, no afterlife of any sort, no Supreme Being. You drop the mic and *boom* you’re outta here.

I don’t know about you, but this possibility makes me very uncomfortable. Luckily, I don’t believe it, and can largely set it aside. However, whatever faith I have in the soul as a discarnate entity doesn’t help me much when I wonder if I’m just spinning my wheels while I’m here. When I wonder if I’ll get to the end and be filled with regret for what I could have or should have done instead of what I did.

What regrets do I mean? Since I’m pretty accepting of my non-saintliness, I don’t mean I’ll regret not doing more for others. I put the people I love above myself, but that’s it. With all others I try to abide by the Golden Rule as my father taught it to me. I’m okay with the limitations of my altruism. “Do unto others as you would have them do unto you” is not a bad way to treat people, provided you’re of fairly sound mind.

The regrets I mean concern my chosen career path: writing. As in, What the hell kind of career path is that?

Why does this come up now when I’ve publically declared myself to be excited about the new year (See last week’s post, “2017: Over the Rubicon”), specifically about the writing part of it, the part where I finally get my novel, The Space Between, into print?

Because just in the past couple of days, when I consider that prospect, a thought balloon forms above my head. And it reads, “So what?” Not because writing is meaningless work. Far from it. If I felt that way, I wouldn’t have spent the past 11 years on the manuscript, rewriting, rewriting, soliciting the occasional publisher, and when it came back to me, trying again to get it finished to the best of my ability. I would have dumped it a long time ago, and I certainly wouldn’t have bothered to write Book 2 in the series.

It’s just that sometimes I have a sense of hopelessness about it, the fear that ultimately, it will be as if I have never written the book at all. The whole episode—the effort, the years, the endless agonizing over it—will vanish into an obscure corridor of family history, eventually (and by “eventually” I mean “soon”) to be forgotten by all. Every writer should expect his/her own work to be forgotten, of course. Even for the famous and well-regarded, what are the odds their work will endure long into the future? I just expect mine to be forgotten a lot sooner. After the hazy beginning, a dim, indeterminate end. Poof.

Twitter can be fun. I enjoy following my friends, favorite authors, Fortean tweeters, food writers and celebrated chefs. Sometimes I enjoy tweeting myself. But for the writer trying to get noticed, Twitter is a vast wasteland dotted with stark, dead trees. Each of these trees’ many sharp branches is mobbed with tiny, bedraggled birds, each lifting a lone voice that tweets into the brown, noxious atmosphere, forming a hungry chorus of desperation. “Look at me! Listen to me! Me me me mememememeeeee!” So many thousands of us just alike, cheeping for attention. Begging people to read our books: steeply discounting them, even giving them away for free. I’ve had a number of these writers try to give their books to me. I can’t accept them. I don’t have time to read them. And I guarantee you, many of them will be bad. Really bad. Some of these people can’t even write a Twitter profile without typos and grammatical errors. How could their books be any better?

Spending time on Twitter has made me wonder about the value of promoting my own work there. How can it do any good when so many others are after the same thing I am? How do I stand out in the crowd?

Unfortunately, I am clueless. Thus, my hollow hopelessness today as I wallow in the Slough of Despond. But I have to keep going; I have to try. If I don’t, then these years truly will have been wasted. I’m hoping the excitement of it all will come rushing back as I move further along in the publishing process. That maybe the publishing horizon will shine with possibilities again once I’m holding The Space Between in my hands.

I’m a writer. Over my lifetime, I have spent countless hours and days writing. Fiction. Poetry. Nonfiction. It’s the only job I know even the tiniest bit about doing. And when the likelihood of my work being quickly forgotten or completely overlooked leaves me feeling especially bleak, I can say to myself, “I have written.” At least that’s one regret I will never have.

You know what? I’m starting to cheer up again already. Thank heavens anxiety weighs down only half of the seesaw. The other half holds airheaded optimism. Now for a few rounds of “The Doom Song.” ^_~ 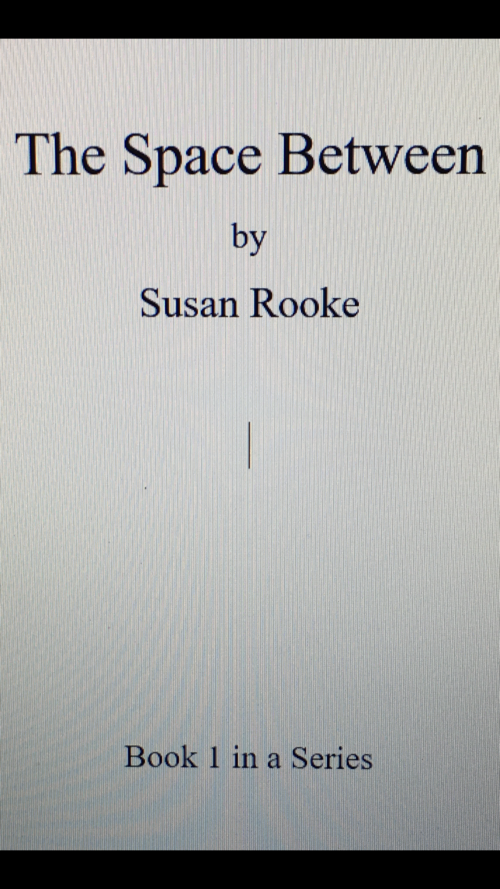