When Fictional Characters Come to Life

I’m thinking about the characters I’ve created for The Space Between, as well as for Book 2 in the series. I’m sure the same will hold true of Book 3, when its time comes. But I don’t really mean I “created” these people. I mean, “They spoke to me in dreams and reveries, insistently, until I heard their voices and wrote down their desires, their heartaches, their regrets.” To me, these characters aren’t fictional. I’m not at all sure that my belief hasn’t imbued each one with a sort of cloudy reality that transmits a life and will of its own. I’ve read often of writers who feel the same way about their own creations. I never thought I’d be one of them.

I’ve been considering this phenomenon over the past week as I unpack moving boxes. My first priority has been to get the kitchen up and running, but it’s been an exercise in frustration. Each time I opened another enormous box marked “KITCHEN,” hoping to find my daily use items, like the dough hook for the stand mixer, or my favorite saucepans, instead I’d find the huge roasting pan brought out only at major holidays, or the steamed pudding mold that I bought in 1979 and never used. (And lots more besides, but that’s another blog post.)

I was getting a bit wrought up about the repeated failures, until Glen calmly said, “Quit worrying. It’ll all turn up.” The next day, after a conscious effort at tranquility (remember George Costanza hollering, “Serenity now!!” on Seinfeld?), I began unpacking my old familiar treasures, one by one. It seemed as if, once I was ready, they found me.

A few years ago, a group of my characters did something similar. I was in the middle of the umpteenth revision of The Space Between, every day completely immersed in the work. Each night I fell into bed with a flaccid, overtired brain, still thinking about the Penitents. (As I said in last week’s post, the Penitents are a tribe of faeries who feel such remorse over a moral transgression their ancestors committed that they have caused some pretty awful physical afflictions to themselves.)

One day I spent a lot of time on one particular scene that takes place in the great hall of the Penitents’ Keep and features Lugo, Master of the Keep. That night I had a dream.

I was at the service counter of an old-fashioned hardware store, waiting to pick up some small appliance I’d left to be repaired. It was the kind of store with scarred wood floors and dusty shelves displaying every part you’d ever need, whether to repair your lawnmower or build a perpetual motion machine. The kind where every employee knew the inventory by heart and had worked there at least thirty years.

As I waited, a group of eight or ten very odd-looking folk entered the store and filed past me in a line, their eyes averted. All were dressed in outdated clothing. The men wore leisure suits and Nehru jackets; the women wore polyester pantsuits, and had blue eyeshadow and teased, frosted hair. They looked strikingly out-of-time in the 21st Century, as if they’d walked in off the set of an old TV show.

Despite the fact that they wouldn’t look at me, I had the strong feeling that they very much wanted me to notice them. Then I realized (without giving any of the story away) that every one of them bore some physical deformity. Suddenly it dawned on me that I knew who these people were. They were my Penitent characters—Laurel, Constant, Deirdre and the rest—and they’d tried to disguise themselves as ordinary hardware store customers by dressing in a way they believed to be fashionable for humans.

They had come to find me. But what did they want?

I remember so clearly the sensation of being thunderstruck to see them there in my human world. But they remained silent, and soon had looped past me and left the way they’d come in.

Then the last one of them, a man wearing polyester bellbottoms and an open-necked shirt with an oversized collar, stopped in front of me, and, unlike the rest, he gave me an appraising look. It was Lugo.

In the dream I stared at him, speechless. Then he spoke to me.

“We just wanted to make sure you’re as comfortable with us as you think you are.”

Before I could respond, he turned and followed the others out of the hardware store.

So Lugo, wherever you are, here’s my answer: I’m not sure I was, then. But I am now. And thank you for finding me.

The Space Between: A Taste

Before I begin I’d like to say how grateful I am for all my readers. To everyone, whether you’ve been here from the start, or whether you’ve joined us more recently, I appreciate your support! Thank you for discovering this page, and for reading!

This week marks the event that Glen and I have been anticipating for the last two years: We’re moving into our “forever home.” I’ve written about that subject several times before, once devoting an entire post to it (find it here). Living in a small farmhouse for all that time brought consequences I hadn’t intended or foreseen. Probably the most harmful one was that, in 550 square feet, neither humans nor pets moved around as much as we were accustomed to, and as a result, we all gained weight. Some of us *ahem* more than others. Phoebe alone seemed quite comfortable with her increased heft, earning herself a new nickname: “Jabba the Catt.” 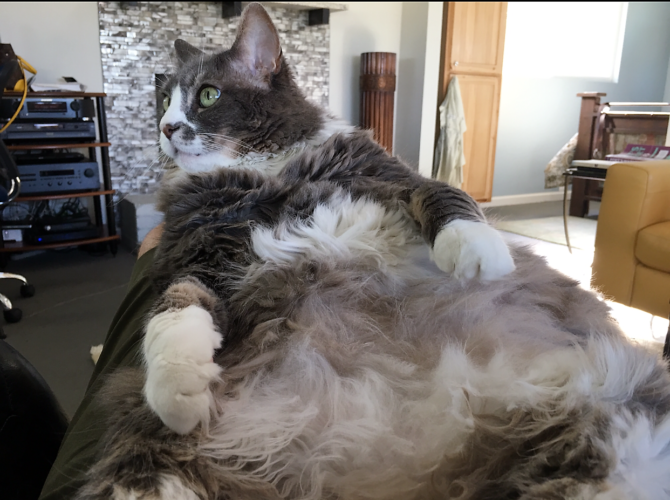 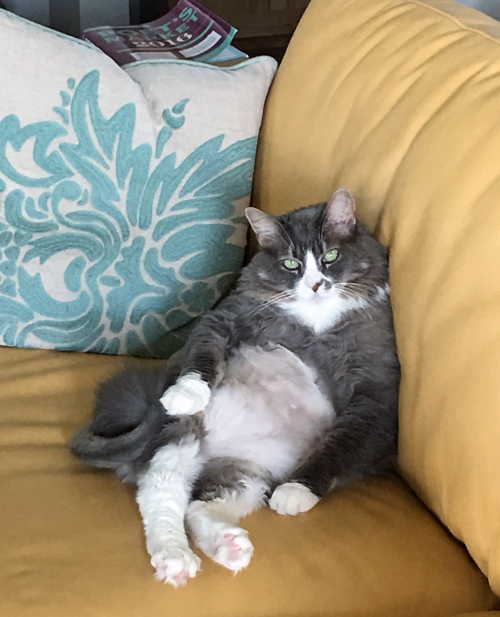 In retrospect, though, I think she may have been more “Marlon Brando, the later years.”

So the move, for all our sakes, couldn’t have come sooner. And I’m ecstatic that the day has finally arrived. Honest. I’m just not sure how I developed a limp, a hitch, a hunch and a slouch all in the space of three days. I feel 1,009 years old. (That would make Glen a mere pup of only 1,004.)

We used to move from city to city, from house to house, all the time. On a whim. Just for fun. But now when I walk out to the garage of the forever house and face this (and trust me; this isn’t all of it) . . . 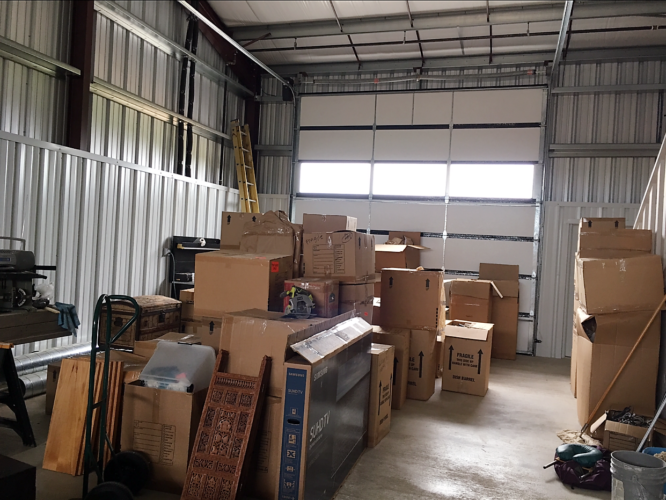 Clearly, I have enough unpacking to keep me busy for some time. So while I’m working on that, what I’d like to do here today is share with you the prologue from The Space Between, the forthcoming first book in my fantasy series. Its publication is drawing closer each day. In fact, by the time you read this, the final copy edit should be complete, and I’ll be considering cover designs. (Eep!) I intend to share more of the book here in the future, but for now, just a little taste.

First, however, a little background on the story, without giving anything away:

As my “Works” page describes, the books are based on the folk legend that faeries are the descendants of fallen angels. The Space Between tells the story of Mellis, a courageous and resourceful young woman stolen from the human world by a tribe of faeries known as Penitents. Of all the faery tribes, the Penitents are the only ones who regret their fall from grace, and out of a profound sense of guilt, they’ve cursed themselves with afflictions, some quite terrible. They kidnap Mellis because they believe she can help them return to their ancestors’ state of divinity. Living beside them, Mellis comes to appreciate their kindness and humility, but then is deeply alarmed to be drawn into a deadly conflict between the Penitents and a former member of their tribe: a murderer who takes Satan as his lover and ally.

From The Space Between:

Prologue: Before the Beginning

The fall seemed to go on forever. Sometimes plunging through clouds of icy shards, his flesh burning, scraped raw. Slowing sometimes, or seeming to, in the firmament’s cold hollows. Once he thought he glimpsed the rim of eternity. A fiery radiance shimmered there, crackling at the farthest reaches of his sight. So empty were the heavens. Nothing to cling to. And thus he continued to fall—faster, slower—until he thought he would fall for the rest of time.

He understood the emptiness was not complete. The only true void had existed in an age before his own. But in these infinite distances, the few bodies were a sparse scattering of tiny specks of light, so removed as to have no relevance. Like his shattered heart, a vast emptiness dotted with rocky, sterile hopes. The darkness he saw upon the face of the deep frightened him. It was like the darkness growing within himself.

As he fell he had time to ponder. Why such fury, this ultimate punishment?

He had acted boldly, with imagination and daring, and for that he should have been rewarded. Instead he had come to this. Great and manifold his blessings had been—and then were stripped away. How far he had come from the first light of morning, the light that brought day out of night!

Ice crystals flayed him, searing with a chill fire. His single comfort as he fell was the thought he held close to him in the measureless universe.

I did not fall alone.