Sunday morning I got up much too early—before 4 A.M. I’ve never been a very sound sleeper (maybe that’s due to sleeping with my eyes open *snort*), but for the past ten years it’s been worse. And for the cause, I can point with a reasonable degree of certainty to this: 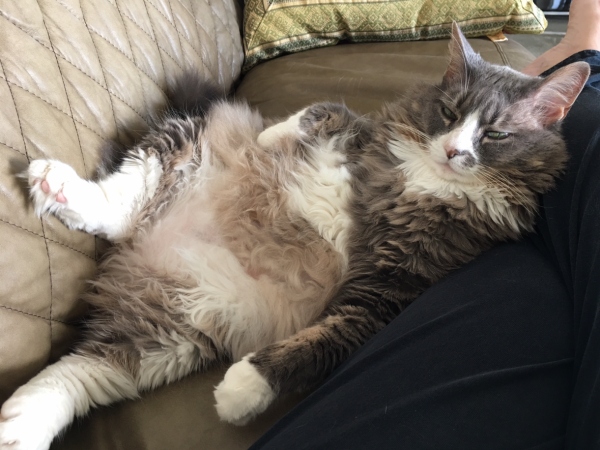 Ever since Glen and I adopted her from the Austin animal shelter when she was about 8 weeks old, 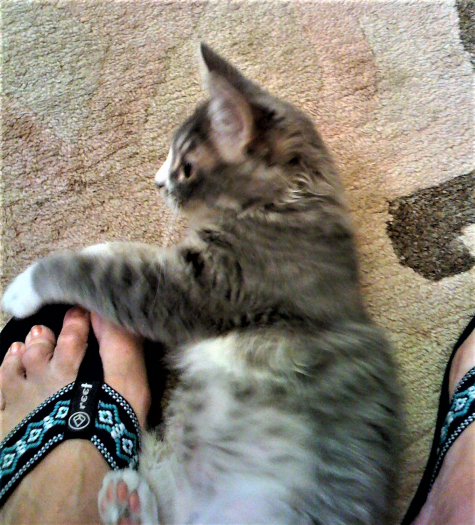 Phoebe (aka Tatonka, Jabba the Catt, Queen of All She Surveys and Tons o’ Fun [or Squirt, as Katie calls her]) has ruled the household with her incessant demands. And many of her demands interfere with my sleep.

Sunday morning, for instance, she demanded that I arise at 3:50 A.M. and entertain her. I wasn’t done sleeping, but that didn’t stop Phoebe from chewing the bedside lamp cord, chewing the bedside table leg, chewing my flipflops (bedside) . . . chewing anything she could fit in her mouth. (Also a lifelong pattern, in case you couldn’t tell by looking at her.) All just to make noise and get me out of bed.

Does she ever go to Glen’s side of the bed and try to wake him up? Don’t be silly. She knows he’d never hear her. A good thing she doesn’t, too. She’d probably fry herself chewing on his lamp cord. And Lucy’s hopeless; she’s the soundest sleeper in the house. 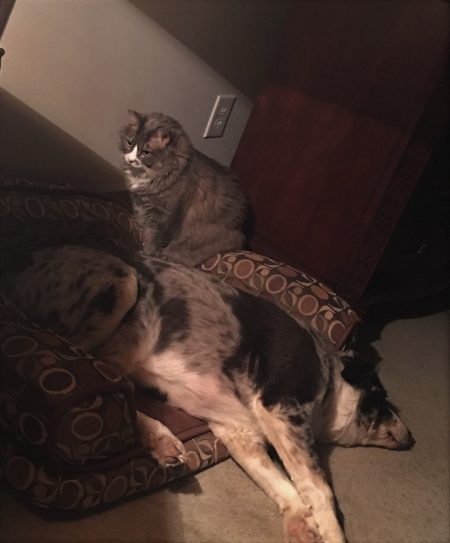 The situation is now so bad that I’ve taken to sleeping with a spray bottle full of water within grabbing distance. One good spritz will keep Phoebe at bay for two or three nights. Only rarely do I get to use it, though. As soon as I rise up on one elbow and reach for it, she scampers off (okay, galumphs off) into the darkness making gleeful little trills and chirps. At that point she’s too far away to spray and I’m too awake to go back to sleep. So I get up. And that explains Sunday morning.

The Daughter, on the other hand, is mother to the consummate companion cat: a 14-year-old Tonkinese named Tsuki. Less than half Phoebe’s size, Tsuki is oozy, clingy and adorable, and as limber as a Chinese acrobat. 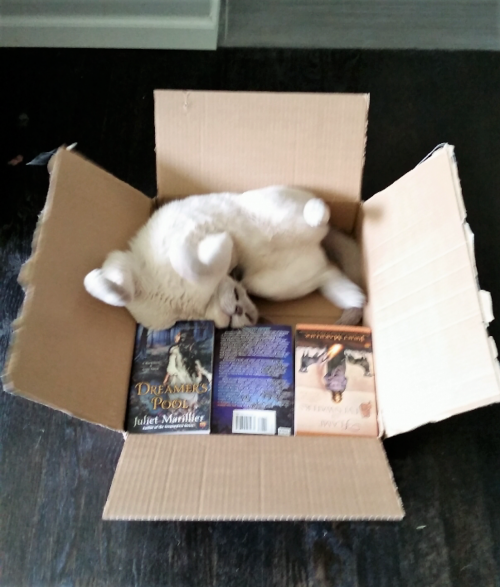 Katie needs a warm furry neck scarf? Tsuki is there. 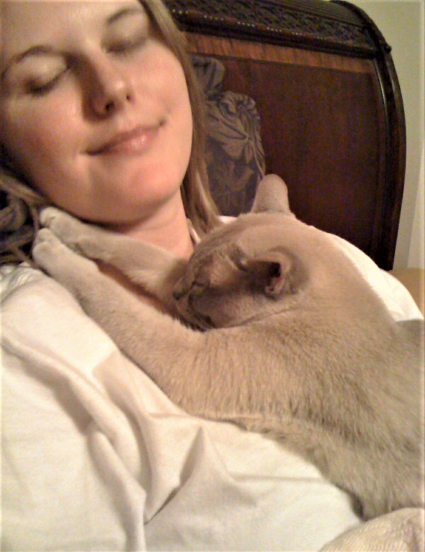 An advisor at the card table? Tsuki will oblige. 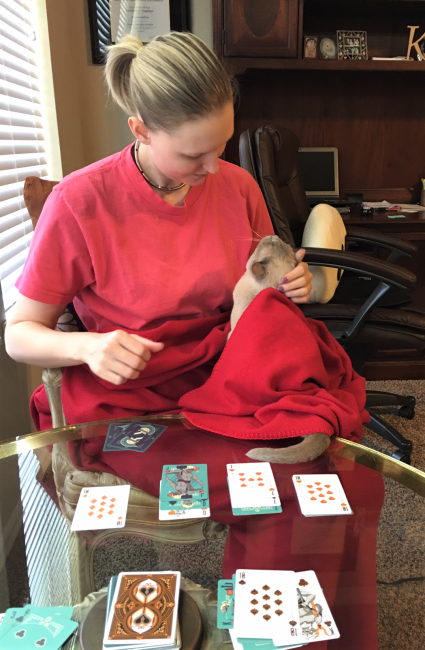 How about a rip-roaring game of hide-and-seek (daylight hours only)? A decorative centerpiece? A cat-in-a-blanket? 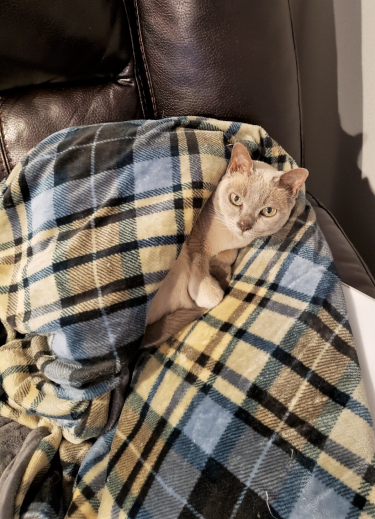 Tsuki’s available for all of it, always loving and perfectly behaved, never making unreasonable demands. (Well . . . maybe occasionally. She’s still a cat.) This has made Katie smug. She is fond of telling us that Phoebe is our “empty nest cat” and that as a consequence, “mistakes were made.” Meaning we made them. Oh, swell. How does that help us now?

But she’s right, of course, and it’s Glen’s fault. Mostly. It all started when Phoebe was still a kitten and he encouraged her to drink water from the faucet at his bathroom sink. She’s always had a bowl of fresh water available to her, but from her very first taste she preferred the cool water flowing from the tap. So much that multiple times each day I’d hear her meowing from the master bathroom, demanding (there’s that word again, but no other will really do) that someone (i.e., me) come at once and turn the water on. It didn’t take her long to realize that she was really thirsty at night, too. (Did Glen get up for those nighttime waterings? What do you think? Even though each time Phoebe leaped up to the sink, she thumped the cabinet loudly enough to wake the dead. But Glen slept on.) Tap water was at the top of the slippery slope, and from there it was just one misstep after another.

The last straw for Katie came one morning when she walked into the kitchen and saw something I’d sworn I would never allow: Phoebe stretched out on the kitchen table while I ate breakfast. (Yes, Tsuki has been on Katie’s table many times, but apparently not during meals. So how is this different?) 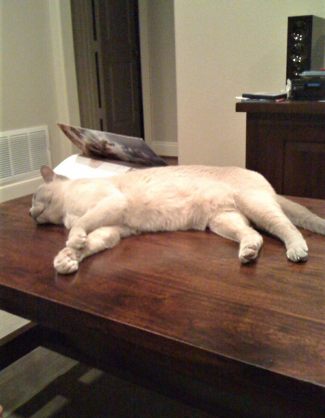 Now that Phoebe’s 10, diabetic and spherical, the bathroom sink is beyond her leaping capability. Thankfully, drinking from the water bowl on the floor doesn’t cause nearly as much commotion. But she continues to wake me in the wee hours, perhaps even more often now to compensate for what she can’t do anymore. And after she’s had her fun toying with me, she gets to sleep all day—a win-win for any cat. 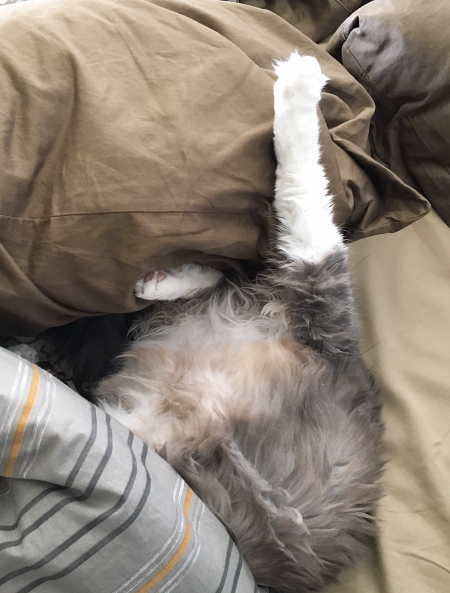 But despite her shortcomings (and how I felt about her Sunday morning), Glen and I wouldn’t trade our empty nest cat for anything. Even Katie thinks she’s pretty special. We’ve never had another cat like her. Unflappable, not fussed by strangers, loud noises or dogs. If someone comes into the house, she doesn’t hide. She goes to greet them and investigate what they’re up to, and, if possible, sit smack in the middle of it. (Right, Gerard?) No, we wouldn’t change a thing. As far as we’re concerned, the mold was broken when Phoebe was made.

Probably because she sat on it. 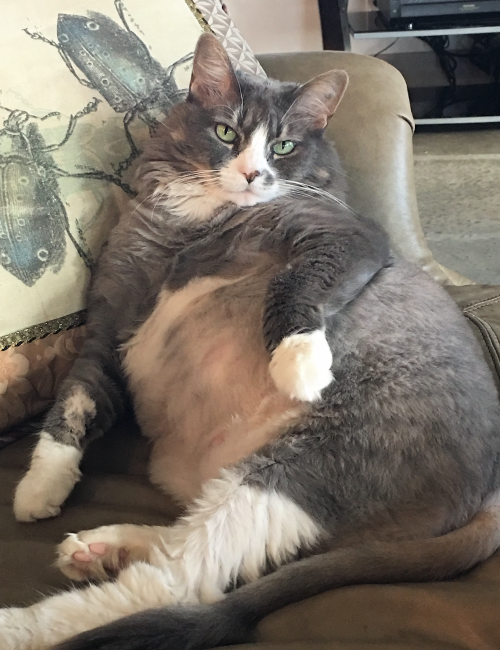