His powers diminished and his form greatly changed, Satan bides his time until he can return to his terrible strength and his kingdom of followers. Cautiously hopeful of Satan’s defeat, the Penitents have resumed their lives in the Space Between, while contending with new additions and the tragic loss of one at the Keep.

When Satan discovers his disciples can be easily led astray, he decides to reinvent himself. And what he does next will set off a desperate search across three worlds.

Praise for The Space Between

“The Space Between offers fast-moving adventure and a fresh portrayal of faeries!”
– Salina B Baker, author of Angels & Patriots

“[Rooke] does an amazing job at bringing every single person and creature to life with its own personality and tale…”
– Tonja Drecker, author of Music Boxes

“…a great fantasy tale with an original premise and vivid descriptions.”
– Diana L. Conces, author of The Golden Feather

Audio Clips from The Realm Below 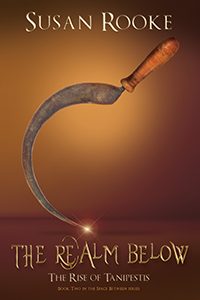